Nothing goes on there,” an Iloilo native who had left the country three decades ago quipped. We were having lunch at a new restaurant in Rockwell, and I had just told him that I was visiting the city for the first time.

Three days later, sleep-deprived and fresh from a two-hour delayed 5 a.m. flight, I was worried that I had forgotten to buy a few essentials at the airport. But after a 20-minute drive, I was simultaneously greeted by the sight of the Injap Tower Hotel—my accommodations for the next three days—and the fact that it stood right across SM City Iloilo. It also had a 7-Eleven at the ground floor.

Brunch at Horizon Café on the hotel’s 21st floor provided a bird’s eye view of the city. Peering out of the glass panes, we had a clear view of the Ayala and Megaworld developments in the vicinity, the transportation hub right across the street, which could take you anywhere in Iloilo, along with top universities, Chinese schools, the Iloilo Convention Center, and nightlife hubs that had sprouted about in the last two to three years.

But miles away from stressful Manila, here we got a good dose of the warm and easy going Ilonggo hospitality, along with paved bike and jogging lanes along the Iloilo River (kept clean, mind you) for fitness and outdoor enthusiasts. Touted the most livable city in the Philippines, Iloilo is the perfect mixture of a laid back provincial vibe and the convenience of living right smack in the the middle of development. Popular food and beverage chains such as BonChon, Moonleaf, J.CO, and many more have also made it into the city. “Dati wala kang mapaglagyan ng bag sa baggage compartment galing Manila kasi puno ng J.CO boxes,” a former Xavier teacher now residing in Iloilo observed.” Now they have so much more than the standard list of restaurants and cafes, in addition to homegrown food establishments, which are a must-try for visitors.

An important city during the Spanish era, Iloilo holds several centuries-old churches such as the Miagao Church, which was once used as a fortress against Muslim raiders. The UNESCO World Heritage Site is notable for the detailed carving on its facade. We also paid a visit to the Molo Church, with its all-female ensemble of saints along the main aisle; and the Jaro Cathedral, known for its Romasque Revival style of architecture. The scenes we beheld almost transported us back to Europe, save for the 30+ degree weather.

Iloilo is also home to a number of ancestral houses, which have opened their doors to visitors. It is here that I learned to appreciate the relaxing rustle of capiz shell chandeliers blown by the wind, and how well-ventilated these old residential structures are, keeping you cool even during the worst of summer. At first, I balked at the idea of having hot chocolate in an open, non-airconditioned dining room. But we did, and it wasn’t the least bit uncomfortable. We enjoyed thick cups of Tsokolate eh at the Camiña Balay Nga Bato, with a side of biskotso and mamon tostado. We were told to ring a little bell if we wanted refills—which I did, because it wasn’t every day that I got to sip such rich, concentrated tablea goodness. The ringing of said bell to call the servers had a very old Spanish, “Yaya!” feel to it, which is probably what kept all the other visitors from ringing—and why they all turned to look at me when I did. The chocolate was worth it.

It is also here in Iloilo that I realized that the only batchoy I’ve had in my entire life was of the Lucky Me sort. This was instantly rectified by a trip to Netong’s, located in the maze of La Paz Public Market. With its savory, garlicky flavor, contrasted with slivers of liver and topped with crispy chicharon, it was the ultimate bowl of comfort—and full-bodied authenticity, which unsurprisingly I didn’t get from any of my instant noodle packets. We finished it off with P40 glasses of iced native coffee at the iconic Madge Café.

Our day tour ended atop Injap Tower Hotel’s helipad, the highest point in Western Visayas, with a panoramic sunset view of the entire city and the nearby island of Guimaras.

We started the next day at the ungodly hour of 5 a.m. to visit the Gigantes Islands in Carles, Iloilo. Roughly two hours away by land and another hour by boat, we began our island hopping at Cabugao Gamay, the most Instagrammed island of the group.

Most of the visitors at Islas de Gigantes seemed to be locals, enjoying the white sand beaches, crystal clear waters, and breathtaking limestone formations (those on Antonia beach looked like giant slabs of sliced bread, falling against each other).

With little to no establishments on the islands, occasionally you’d see tents for camping, including some which had been used to temporariy house Yolanda victims. More than two years after the super typhoon hit Visayas, you wouldn’t be able to tell that these islands had been razed. The only signs were the occasional UNHCR tents, and stories from those who knew the area before the tragedy struck. “There used to be two coconut trees on that little island. Kinuha ni Yolanda yung isa,” our guide shared. Or, “Everybody who lives on this island is family. There used to be 14 families here, but three of them moved to the mainland after the typhoon. Natakot.” These were little cracks in paradise, only visible upon closer inspection.

Be prepared for a bit of rock climbing

There are quite a few rock formations to climb in order to see the best views, or enjoy the most beautiful parts of a particular island, so bringing a pair of aqua shoes is recommended. Tangke Saltwater Lagoon is one such gem. Concealed behind towering limestone and accessible through a narrow, rocky entrance, it’s a majestic little haven tucked away from the open sea. A troop of Philippine long-tailed macaques lurk here silently, so mind your belongings as they sometimes scavange unguarded objects.

Another must-try when you visit Islas de Gigantes is their daily catch of seafood, which they sell for practically nothing. On Bantigue sandbar, scallops (locally called tikab-tikab) sell for P1 a piece. We bought 100 and snacked on them like peanuts during the remainder of our island hopping trip. Preparation was nothing fancy. Straight from the ocean, they were steamed and served with a side of spicy vinegar if you liked. But we found that the sweet, fresh meat tasted so much better on its own. 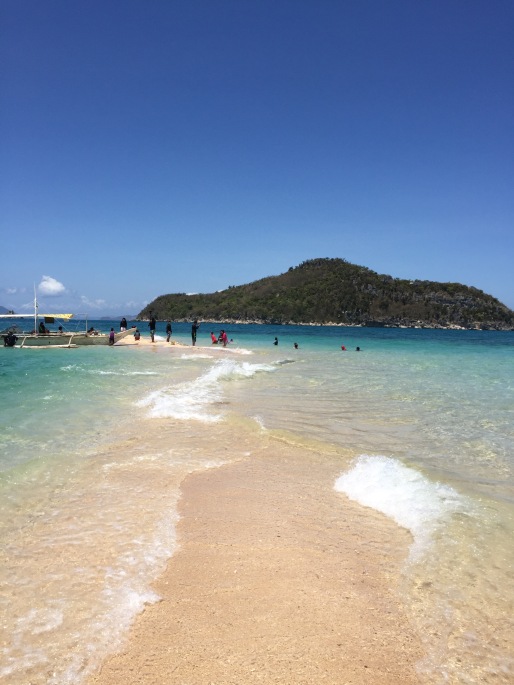 We wound down the day’s tour on the peaceful Balbagon Island, with the calm low tide lapping against a long, empty stretch of white sand. Here the locals served us a late lunch of seafood, after which we took much-needed naps under the trees while waiting for the harsh noon sun to soften its rays. At dusk, we sailed into the sunset for home. Back at the hotel at around 9:30 in the evening, I slapped on a Korean cooling facial mask and fell asleep with it still on.

With no set itinerary for our last day in Iloilo, I marinated in the glorious comfort of sleeping in under the duvet. The hotel was kind enough to still serve me breakfast when I showed up 30 minutes late for their breakfast hours. What followed was a chill mini city tour, driving along Iloilo’s decongested roads. We tried a few more items of food, such as Roberto’s famous siopao and Maridel’s ice cream cakes in Plazuela de Iloilo. Most known for their mango brazo ice cream cake, I especially liked the unassuming lightness of their lemon merengue pie.

We had one last coffee session, editing our beach photos and dreading our impending return to Manila (“At least here, even if it’s hot it’s windy”), and we were off to the airport. Back in the capital, over the next few days, I’d dream of dipping in cool emerald waters, sipping thick, nutty hot chocolate, and the gentle rustle of capiz shell chandeliers in the afternoon breeze.

Originally published in The Philippine STAR, Travel and Tourism (8 May 2016)